Common questions asked of Academic Senate presidents at the University of Utah include why the University has an Academic Senate, how it works, and who gets to have a say. Several events contributed to its creation, but the firing of four male professors in 1915 and the pushback from both the local and campus communities solidified its existence. What is now the Academic Senate started as the Administrative Council on April 12, 1915 with five elected professors. Its initial role was to represent the faculty and establish formal communication with the University’s Regents about tenure, academic programs, and funding. Over the last century, the Academic Senate has grown from five professors to 118 voting members representing students, professors, instructors, researchers, clinicians, librarians, and deans. Despite its growth, the Senate still serves its original function of establishing and maintaining lines of communication between faculty, students, and administrators.

Issues surrounding employment contracts, salaries, freedom of association, and freedom of speech quietly simmered at the University during the first decade of the 20th century. Professors petitioned for raises and job security while students asked for progressive political clubs and speakers. As valedictorian Milton H. Sevy put it in his 1914 commencement address, conservatism had for too long “been a matter of pride” in Utah (Sevy 1914). University leaders responded to these requests by banning not only outside employment for professors (including running for political office), but also denying students the ability to form political clubs and host political speakers. Although this “clash” of rights in 1914-1915 formed the Academic Senate, battles had brewed between faculty and administrators over academic freedom from the early days of the University.

Contrary to many assumptions, the University of Utah was not established as a religious school nor did it start as an agricultural college or a traditional liberal arts institution. It grew in fits and starts and was ultimately a product of a culture and community which had been defined not only by strongly held religious beliefs and a history of persecution for those beliefs, but also a diverse mixture of educational, religious, and immigrant experiences. This text incorporates a brief history of the University and its governance for the purpose of establishing the world in which the Academic Senate originated. Meeting minutes taken by the original University of Deseret Board of Regents or the Regency as it was formerly called (this work uses both terms throughout the text) provided the early historical record.

In the beginning, the Regency governed the University of Utah. The committee was created by and vested with authority from the General Assembly of the State of Deseret—a provisional, civil government proposed by Mormon Church leaders two years after they arrived in Utah.[1] This tentative government petitioned for and received territorial government status from the U.S. Federal government in late 1850 and although it represented a civil government, the LDS Church High Council established it to rule the Mormon pioneers who immigrated to Utah. This High Council had elected themselves to serve as members of the Deseret General Assembly in 1849 and they elected LDS Church President Brigham Young as Governor (Arrington and May 2007) (Morgan 1940).

In one of its first matters of business, the General Assembly passed an ordinance (later ratified by the Territorial Assembly on October 4, 1851) to establish the University and empower the Regency. See Figures 1 and 2 for the General Assembly roster and those in attendance on February 28, 1850 when the University of Utah was created. The duties of the Regency consisted of determining courses of study for the University, administering a system of both higher and public education throughout the state, and acting as “fathers and guardians” of the institution (full ordinance). The formulation of a university for the State of Deseret did not represent a foreign concept to early LDS Church leaders. The incorporating ordinance for the University of Deseret appeared to be a close replica of the university Mormons had previously established in Nauvoo, Illinois in 1842, which was only partially realized before Nauvoo was destroyed when their first leader Joseph Smith was assassinated and LDS members were forced out of Illinois in 1847 (Moffitt 1946).

The General Assembly elected many of its own members to serve on the Regency, as such the roster includes many individuals who featured prominently in early Mormon history. A few members had advanced education and experience in teaching including Orson Spencer (Chancellor) and Orson Pratt who briefly taught for the University of Nauvoo. This board not only administered and managed the early school, but out of necessity also served as teachers and librarians for the University.

University of Deseret Board of Regents, 1850

Although the early Regency consisted of State of Deseret and LDS Church leaders, the committee eventually evolved into a citizen board of advisors. In 1869, the President of the University began to assume more authority in an effort to balance the power of the Regency. Eventually, professors also sought to balance the power by pushing for committees that could recommend policy changes or, more importantly, seek to have the power to approve a policy, new faculty member, department or major before being implemented. The timelines included in the preface show this progression.

The Regency held their first meeting on March 13, 1850 in the log cabin of fellow General Assembly member, church leader, and Regent Parley Pratt where they elected a secretary and created several committees. One committee focused on drafting a preamble and proclamation, another determined a site for the University[2] and other committees focused on book selection and the preparation of a university seal. They also tasked Regent Albert Carrington to write Joseph Henry of the Smithsonian “for any information regarding plans of Buildings, of Schools, of Books, and apparatus for the diffusion of useful knowledge” (University of Utah Board of Regents 1850-1969, Box 7), which he did on November 30, 1851 (Carrington 1851). 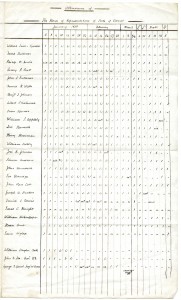 Figure 1. Senators of the State of Deseret, 1850 (Courtesy of LDS Church History Library)

Figure 2. House of Representatives of the State of Deseret, 1850 (Courtesy of LDS Church History Library)

Despite the fact that the Regency consisted of Mormon Church leaders, the meeting minutes provided no evidence that these leaders intended for the University to disseminate religious education. Instead, the minutes illuminated the challenges of creating an institution of higher liberal education for a population of pioneers who possessed little formal education. The meetings highlighted the concern of all state leaders about how they wanted to quickly train teachers in order to establish a public school system for children. The early state leaders–some of whom had been educated at well-established universities in New England–wrestled with how to meet the demand of training teachers while honoring the tradition of creating an institution of higher learning that concentrated on classical and liberal education.

The first meetings of the Regents reflected the power Governor Young held over them as both their secular and religious leader. Even Brigham Young did not expect the University to be confined to religious instruction. In the second meeting held on March 20, 1850, Governor Young informed them that they were to: first, educate primary school teachers by finding and paying individuals who could be qualified to train them and second, oversee the implementation of a simplified alphabet in order to facilitate efficient learning in the territory (University of Utah Board of Regents 1850-1969, Box 7).

In an early foreshadowing of what has become a well entrenched argument between publicly funded universities and legislative leaders, Governor Young also instructed the Regents to use what limited funds were available for the purposes of education, not buildings (even though they were sorely needed). He warned “he should be at war with the Regency if they used the funds belonging to the University to build fine Buildings instead of educating the Poor” (ibid., 2).

As for the new alphabet, Governor Young told the Regents that it was needed “to condense the truth that is scattered through an almost endless line of dusty volumes that crowd the shelves of every public library” (ibid., 6). According to John Moffitt’s History of Public Education in Utah, Governor Young recommended the new alphabet “be thoroughly and extensively taught in all the schools as a basis of instruction for the attainment of the English language” (54).

In addition to providing directions regarding the early University’s goals and progression, Brigham Young contributed a significant number of his own volumes to form the University’s first library. The collection consisted mostly of German and English Bibles, but also included readers, dictionaries, and musical scores. Henry Gassett of Boston, MA also donated texts, which, along with Young’s donations, necessitated the appointment of Regent William Appleby as librarian on November 3, 1850, a few days before hiring the first professor. 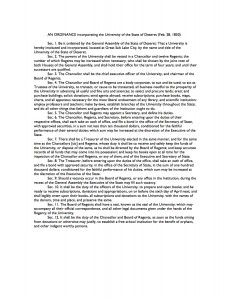 [1] The General Assembly met in regular session from December 1849 to March 1851. Almon W. Babbitt delivered the provisional constitution to Congress for statehood approval after John M. Bernhisel laid the groundwork, but it was denied. Instead, President Millard Fillmore granted territorial status on September 9, 1850 through the Organic Act, appointed Brigham Young as territorial governor and established the territorial assembly (Morgan 1940) (Johnson 2007). The tentative State of Deseret dissolved in March 1851, but continued to be referred to by name and in documents into the 1860s (Morgan 1940). The University of Deseret’s name was changed to the University of Utah in 1892.

[2] The original site selected by the Regents and Governor Brigham Young was near South Temple and present-day University Street. The eastern boundary extended to present-day Wolcott Street and the southern boundary was near 700 South (Utah Territory Legislative Assembly 1855) (Bullock 1860). It would take 50 years before this site became the University’s permanent home. The Regents believed that it was important to build a wall in order to mark university land until funds could be raised to build structures. Before they even hired a professor, the Regents, with the help of Governor Young, employed 72 men to build a wall quarried from rock in Red Butte Canyon. The wall stood four and a half feet tall, sloped at the top, and was three feet at the base (University of Utah Board of Regents 1850-1969, Box 7). The wall no longer stands.